This residential UK summer soccer camp in England operated by Chelsea FC Foundation is unique among international soccer camps in providing in-depth training covering technical skills, tactical appreciation, psychology and physical training techniques. The coaching program is delivered by trained, FA qualified coaches. It takes place at either Chelsea FC’s world-class Surrey training facility or at one of our prestigious private school locations and is considered to be one of the top UK soccer camps (also referred to throughout as football camps).

The soccer camp is can be optionally combined with a quality English language program designed to provide students with both a fun and interactive language-learning experience.

Founded in 1905, Chelsea Football Club play in the English Premier League and have spent most of their history in the top tier of English football. Based in London, their home is the 41,837-seat Stamford Bridge stadium, where they have played since their establishment.

Chelsea FC has become one of the most successful clubs with their first major success in 1955 when they won the league championship, and won various cup competitions during the 1960s, 1970s, 1990s and 2000s. Overall, Chelsea FC has won 6 league titles, 8 FA Cups, 5 League Cups and 4 FA Community Shields.

The club has also been successful in continental competitions, winning two UEFA Cup Winners’ Cups, one UEFA Super Cup and one UEFA Champions League title, bringing it all back to their home London district of Chelsea.
Read More

Chelsea FC Foundation Soccer School is for students aged between 10-17 for boys and 12-17 for girls, and is structured to provide quality sessions which incorporate all technical and physical attributes needed to become the complete player. Training sessions incorporate practical training on skills and tactics, formations, nutrition and psychology.

Soccer camp participants train once per week at the Chelsea FC training grounds in Surrey and 3 days per week at Doverhouse Road Playing Fields. During the program, there are 3 excursions, including Kingston Upon Thames plus shopping, 1 full day in Londona, and an excursion to Stamford Bridge the home of Chelsea Football Club.
Read More

This football camp is open to players of all levels, both boys and girls, between the ages of 10 - 17 for boys and 12 - 17 for girls. This camp focuses on practical training on skills and tactics and is recommended for all player levels.

The advanced soccer camp is offered for soccer players between the ages of 13 – 17, both boys and girls, who are playing for a club and are competitive players.

During the 1st two week camp sessions of July, the camp offers a girls-only training program designed to involve girls of all footballing abilities.

For those participants aged 13 – 17, both boys and girls, who wish to focus on goalkeeping training, it is offered complementary each day according to their level. Goalkeeper specific soccer training focuses on technical skills such as handling, footwork and distribution which can be overlooked when only training with a team. The goalkeeping trainings are specialized and work in small groups to enhance development therefore players’ fitness levels should be good in order to take part in this program.

*Goalkeeper training is only available for the 1st 2 weeks soccer camp sessions.

Language tuition uses a fun, participative approach to learning and emphasizes spoken language skills. Student receive 15 hours of English lesson per week, taught by qualified teachers in classes of a maximum size of 15 students. Students are tested on arrival, and placed in classes with other students of approximately the same level. The program is specifically designed for children with an interest in soccer and includes a range of role-plays, pair-work and activities designed to allow students to practice English within a soccer context.

Although most of the days are filled with multiple training sessions, some free time is given to the participants to take in some local sights such as a tour of the Stamford Bridge Stadium, an excursion in London, and a visit to Kingston Upon Thames for shopping. Excursions included depend on program selection.

Upon arrival in London, players are picked up at the London Heathrow or Gatwick Airport (if airport transfer is selected) and escorted to the soccer camp site. Supervision is provided around the clock, both at the living quarters as well as throughout the day during the training activities. 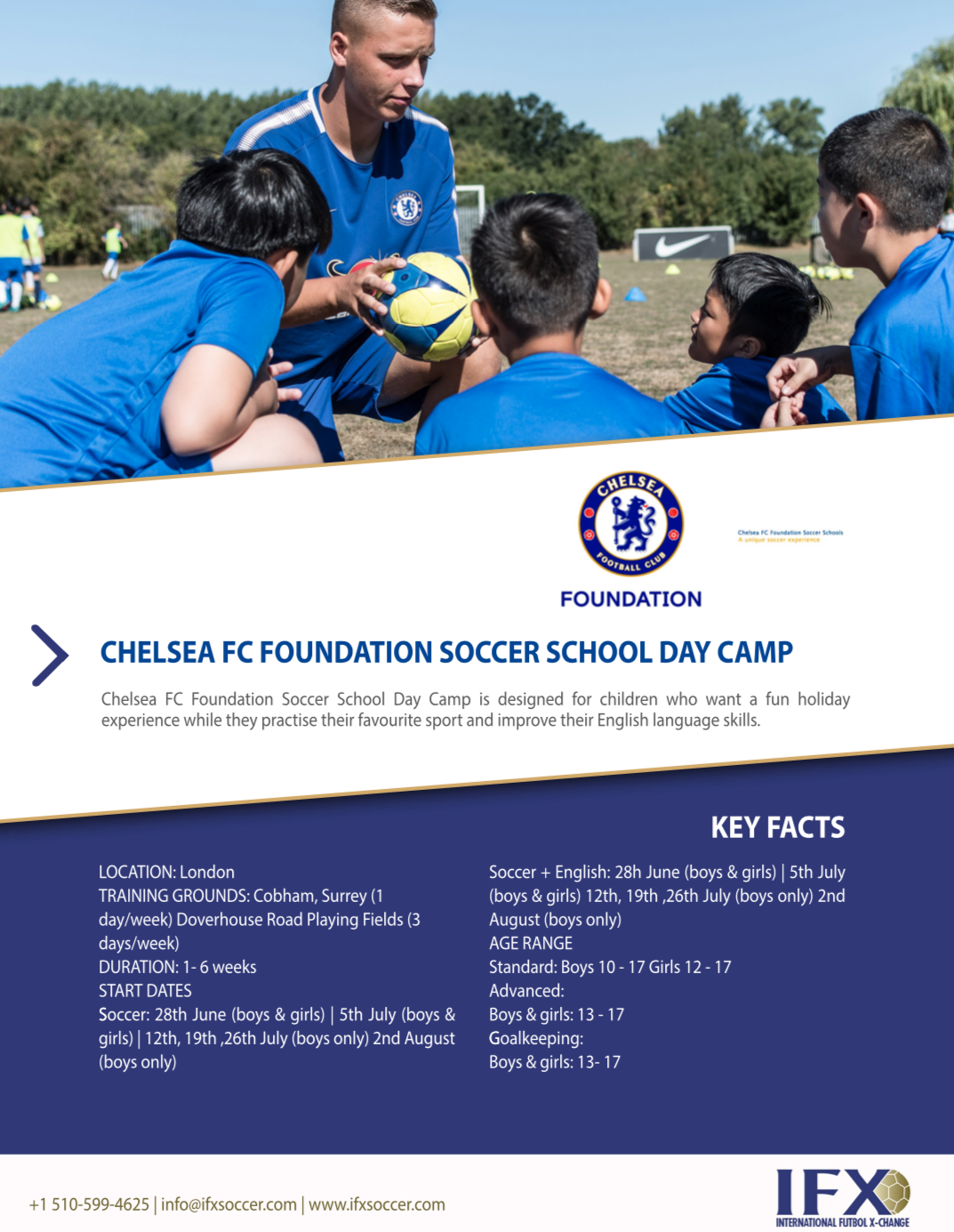 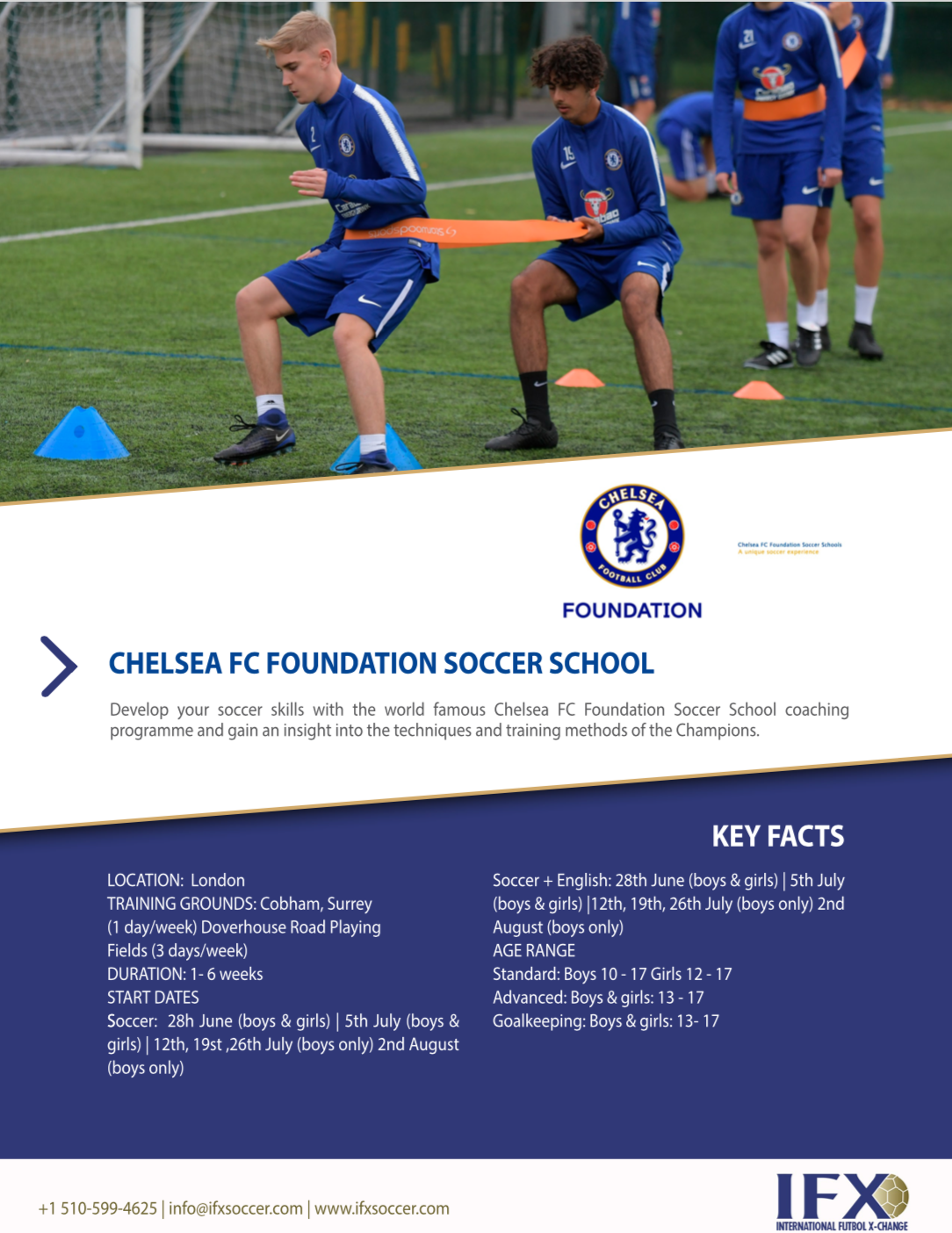 Application and Full Payment Deadline: May 15

We’re looking forward to providing an unforgettable and unique international experience in a country of rich soccer culture.

For more information on IFX’s International Futbol X-Change, please contact us by email or call (510) 599-4625

*Round trip airfare not included.
*Additional spending money required.
*Dates may be subject to modification
*Day camp registration/check-in is on Sunday (day prior to Monday camp start date).
*Residential Accommodation Deposit of 100 £ paid upon arrival in cash
*Transfer fees are non-refundable once purchased
*Flight information must be provided at least 25 days prior to arrival
*Medical insurance is mandatory