Home to some of the world’s greatest football clubs including Manchester United, Chelsea FC, and Arsenal, England is the country most desired to play in worldwide.

With a diverse landscape from large, bustling cities, to quaint towns and shires, England has something for everyone. With an excellent reputation for fashion, film, music, and football, England is the number one destination in the world for students.

Students who choose an academic year, 2-term or 1-term program in Bournemouth, England will attend the prestigious British Soccer School Bournemouth CS, a private British high school with its own soccer academy.

Students live in the school’s boarding house with other BCS students, and play for the BCS Football Academy, a competitive English football academy team affiliated with the professional premier league club AFC Bournemouth, one of the top British soccer teams in Southern England. The football academy is considered to be one of the leading British soccer school academies of its kind located in Dorset County in Southern England.

Bournemouth Collegiate School is a private, English preparatory boarding school and day school located in Bournemouth, England. The school was formed in 2009 through a merger of Uplands School and Wentworth College, both schools with roots dating back over a century. The high school soccer academy offers students a vast variety of course selection and programs of study including standard A Level courses leading to 3 or 4 A2 level qualifications (Year 12 and 13), Pre A Level Sixth Form courses, and standard GCSE courses (Year 10 and 11).

International students are placed into course according to their individual levels and needs. To achieve their aims, BCS believes strongly that they want to develop in every pupil, from the youngest to the oldest the 4Cs of BCS. Their broad and inclusive curriculum aims to develop the 4C pupil. They are:

At BCS, the United Learning ethos of the ‘Best in Everyone’ is upheld.

The BCS Football Academy is one of the most a competitive boys British soccer schools, fielding multiple teams in different age groups, and are comprised of boys attending the Bournemouth Collegiate School as well competitive players from the region going to other schools. The BCS Football Academy has a successful partnership with the AFC Bournemouth Community Sports Trust, the foundation of the professional football club AFC Bournemouth, working to become one of the top pro football academies in the UK.

The BCS Football Academy teams compete in a regional school league, the National Cup as well as in the highly competitive and prestigious Junior Premier League (JPL). Players must be selected based on merit for the JPL squad. Each England youth team is coached by UEFA qualified, professional coaches from AFC Bournemouth's Foundation Academy, bringing the program a high level of quality, experience and oversight from one of England’s top clubs in youth development.

The BCS Football Academy is designed to allow players to access elite level coaching under their Player Development Pathway. The Academy is player centered with focus around individual improvement in their technical, physical, social and psychological attributes, based around the FA Four Corner Model. The Academy encourages players to express themselves with the ball and help them become imaginative and skillful footballers.

The training is based around technical and tactical coaching sessions aimed to challenge and engage a range of player levels. Classroom based sessions focus on player analysis, nutrition, and the social and psychological elements a modern day athlete need to understand.

Players are placed on BCS teams according to their level and age and have multiple training sessions per week, along with added strength and conditioning sessions including yoga and circuit training. Players also will have the opportunity to compete in matches and tournaments, after approval of their player license.

The football program is structured to enable players rapid advancement in their development as a young player and to also provide them with exposure in highly competitive and well regarded English Football youth leagues.

Students in the IFX Bournemouth Academy program live in the Bournemouth Collegiate School boarding house located next to the impressive sports hall on campus with the bedrooms wrapping around on two floors. BCS is a Co-Education School, meaning that we welcome both boys & girls. We recognize they are very different and we try to respond to that by welcoming them into BCS in the way that best suits them at whatever age they may be when they enter the school.

The boarding houses are where friendships are made and a community is developed, but as BCS is also a day school the boarders also have the opportunity to be part of the community and the lives of friends who live locally.

As a boarder at BCS, we offer your child structured independence and the opportunity to grow and mature within a safe and stimulating environment. Living with others will help your child to develop a sense of community. They will grow to understand that caring for others is as important as looking after themselves. Boarding at BCS enables your child to develop friendships which will, and do, last long into their future lives.

They will have the opportunity to develop leadership skills and may be chosen to be a House Prefect or, indeed, Head of Boys’ Boarders or Head of Girls’ Boarders. In these positions they will be expected to carry out boarding duties, chair Boarding Council meetings, speak at public events and arrange events for the boarding community. With the continued support and care provided by the boarding staff, your child will be able to enrich their own life and that of others while developing into a confident, mature and responsible young adult. We help students to become creative, critical, strategic decision-makers, who are ready to respond creatively to the changing world around them.

Participants MUST have adequate Travel and Medical Insurance coverage for the duration of the camp including traveling to/from home country. Medical Insurance is Mandatory. Let us know if you would like to receive a quote.

Students transportation from their home country to Bournemouth, England is arranged by IFX. During the initial days of the program, students are given an orientation to help them assimilate and adjust to their new living environment. Ongoing program support is provided by the staff of Bournemouth Collegiate School.

Students need a visa to study in England and will be assisted in this process. 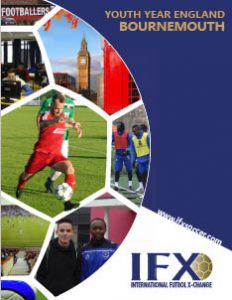 Applications can also be sent to our mailing address at:

Upon receipt of your completed application and program deposit outlined in the application packet, we shall proceed with processing your application and determine your qualification for the program and desired destination.

We’re looking forward to jumpstarting your career and giving you an enlightening international experience.

*All dates are approximations and vary from year to year.
**Academic Year program is only available subject to extension after participation in Semester program.


LATE APPLICATIONS CONSIDERED ON A CASE BY CASE BASIS

NOTE: The IFX program to England has limited capacity, so students are encouraged to apply well in advance of the application deadlines.