Portsmouth FC is a professional football club from Portsmouth, England, currently competing in England’s League 1. In partnership with the Portsmouth FC Foundation and the Isle of Wight College, Portsmouth FC has established an affiliated youth football academy to develop youth footballers from the region under their own club philosophy and management.

IFX is an official partner of the Portsmouth FC Foundation Football Academy and the Isle of Wight College, providing opportunities for international football / soccer players from outside England to train within the Portsmouth FC development model and continue their education at a highly regarded College on the Isle of Wight, or for high school aged players at the prestigious Ryde School, a private boarding school in England. This elite football academy in England welcomes players from all over the world to apply.

Players who choose the IFX England – Portsmouth FC program will compete on one of the Portsmouth FC Foundation youth football academy teams, live with a carefully selected host family on the Isle of Wight, and study at the Isle of Wight College or Ryde School. Eligible students include both those in upper secondary (11th and 12th grade) as well as those who have already graduated from high school.

Portsmouth FC IOW Academy players train 3-4 times per week and have 1 or 2 fixtures weekly, according to the league schedules. Training takes place either at the College grounds or at a nearby Amateur club’s training facility. The team is comprised of mainly English players who are pursuing a BTEC Level 3 Diploma in Sport, but also has some international players from IFX.

Each year, a handful of standout players in the National Football Youth League, have signed professional contracts with pro English clubs. While becoming a professional is the dream of many young players, it is an extremely challenging feat. Players who have been fortunate to sign pro contracts have proven themselves in this tough U19 league, and demonstrated their potential to pro scouts via the direct exposure players get to the various pro clubs in the league.

The Isle of Wight is a beautiful island situated at the very south of the UK, separated by a small stretch of water called The Solent. The island is just a 20 minutes ferry ride from Portsmouth or 10 minutes with hovercraft making the mainland extremely accessible. London is only an hour and a half by train from the Isle of Wight. All players start their journey with a fun and exciting trip on one of the various ferry routes.

The island receives the highest sunshine hours in the UK and has over 70 miles of stunning coastline – over half the Island is designated an Area of Outstanding Natural Beauty. Steeped in rich historic importance the Island is know as the prison of the King and home of the Queen, alongside various other links to royalty all around the Island. Famous also for music and sailing festivals, the Isle of Wight is one of the to holiday destinations in the UK.

For students who are still in high school and looking for an excellent college preparatory education from a  highly regarded English prep school, Ryde School is a great choice. Ryde School with Upper Chine is a prestigious post secondary (high school) private boarding school, where students can choose from a broad offering of educational courses. Ryde School is located in the seaside town of Ryde, on the Isle of Wight.

The school is recognized as a prestigious institution serving pupils both from throughout England as well as internationally. The school aims to provide carefully structured and thorough education enabling pupils to achieve their academic and personal potential and to develop skills appropriate to the world of work and life in the twenty-first century.

At Ryde School, students can select from an extensive range of courses and may also opt to enroll in their prestigious International Baccalaureate program. For further course information, please contact us.

IFX players can choose to reside in the school’s residential boarding house at either their Bembridge or Spinnaker House, their new Upper Sixth Form boarding house in Ryde.

Students in residence at Ryde School live in single or shared rooms and receive experienced pastoral care from full-time staff located on-site. The Bembridge residence is the larger of the two residences, located a short distance from Ryde School by bus, whereby students are transported daily to and from school. It's picturesque country setting, and walking distance to the bluffs overlooking the British coast makes for an idyllic English prep school experience.

The Spinnaker House is located in Ryde town, around the corner from Ryde School, enabling students an easy walking commute to and from school, and with close proximity to local shops and restaurants.

Students who prefer a more vocational education and sports focus, can choose to study in the Isle of Wight College's  BTEC Football Development Program at the Isle of Wight College, a vocational Level 3 Diploma in Sport. This educational diploma is the equivalent in England to graduating from high school, and renders recipients of the A level diploma eligible for studying at Universities in the UK.

The Football Program is a comprehensive program covering a vast variety of sport and football related subjects. It is normally a 2 year program and graduates of the program earn a Level 3 Diploma.

Read more about this academic program on the Academics program page accessible from the menu above.

Participants MUST have adequate Travel and Medical Insurance coverage for the duration of the camp including traveling to/from home country. Medical Insurance is Mandatory. Let us know if you would like to receive a quote. 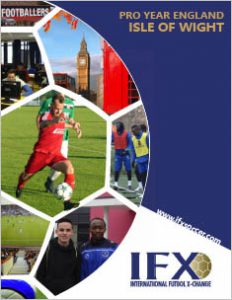 Applications can also be sent to our mailing address at:

Upon receipt of your completed application and program deposit outlined in the application packet, we shall proceed with processing your application and determine your qualification for the program and desired destination.

We’re looking forward to jumpstarting your career and giving you an enlightening international experience.

*Prices indicated are for host family accommodation. Residential Boarding option for Ryde School is an additional $2200 per term (3 terms per academic year).

*Portsmouth FC IOW football academy team season ends at end of April. Training continues through the end of May. No football training in June or July.